Every Child is an Artist project

This term I have been one of a small group of artists working with pupils at Oasis Hobmoor Academy, Birmingham as part of the Every Child is an Artist project, an initiative led by Oliver Scott of Mercurial Dance which seeks to uncover and nurture the innate creativity and potential artist in every child. We have been exploring a variety of art forms including animation, dance, augmented reality and getting creative with electronics. The school has a really forward-thinking approach to arts and technology, housing an ‘Innovation Studio’ complete with greenscreen capabilities as well as iPads for every year group.

I have been working with years 2, 3 and 4 using basic video and animation iPad apps to introduce them to some of the basic concepts and to learn by ‘doing’, giving them simple exercises and projects to help them on their learning journey. We started out using Vine as it’s a great introduction to making and sharing short videos (I’m sure you can imagine how happy they were to make a Vine of however many silly faces they could pull in six seconds!) We then got into some stop motion using I Can Animate, and just before half term we began our meanderings into Comic Life and iMovie. Here’s a blog post describing the first three weeks of the project. 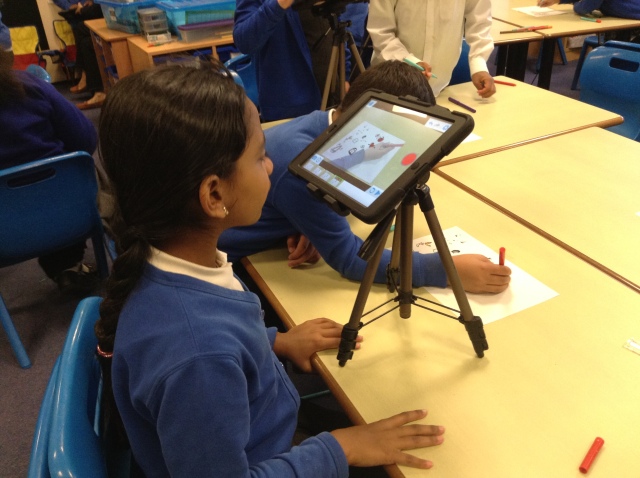 Animating drawings with I Can Animate on iOS

We are also running after school clubs for those who are interested in doing more with the art forms on offer during the school day. I run the after school film and animation club on Wednesdays for year 5, and two weeks ago Oliver and I began training a small group to become Hobmoor’s own TV crew who will be reporting on events around the school – looking forward to seeing their reports!

A believer in having many strings to one’s bow, I am a freelance video producer, ESL tutor, and gardener based in the West Midlands and I am always looking for new projects and opportunities. I’ve yet to find one that combines all three of these things, so if you have something like that for me you might just make my day. ^_^ Contact: mail (at) emmapuente (dot) com
View all posts by Emma Puente →
This entry was posted in Workshops and tagged animation, Comic Life, Every Child is an Artist, I Can Animate, iMovie, iPads, Mercurial Dance, Oasis Academy Hobmoor, school projects, Stop motion, Video, Vine, workshops. Bookmark the permalink.
Loading Comments...
%d bloggers like this: