Back in September I was one of the presenters at Birmingham Pecha Kucha‘s 10th event, a special edition of Dome Club at Thinktank (edit 16/11/2013 – Dome Club is now based at the Custard Factory). If you are unfamiliar with Pecha Kucha – Japanese for ‘chit-chat’ – it is a simple presentation format consisting of 20 images, each appearing for 20 seconds; the images advance automatically and you talk along to them. This method of presentation was devised in Tokyo in February 2003 as an event for young designers to meet, network, and show their work in public (presumably to cut down time and unnecessary waffling)

As I had recently started to explore fisheye photography, when I was invited to take part it gave me an opportunity to really explore what scenes and subjects work best with the medium and also to try out some more animated sequences (I had shown a short fisheye animation of clouds moving over my parents’ garden at a previous Dome Club event). However what I didn’t have was a theme for my presentation, and I had been just about to go on a trip to the US… initially I was wracking my brains over what to photograph (landscapes? Food? Americana?), then one morning my other half pointed out some rather impressive cobwebs on the lawn in front of his mother’s house that were large, dense and illuminated by the dawn light and heavy dew (jet lag meant that we were up before the sun during much of the first week) and this got me started; I took a series of images focusing on different strands of the web and made them into an animation. From there I began to take photographs of whatever caught my eye (or occasionally the eye of my partner and his friend David, who deserve the credit for some of the subject ideas for images taken in the US) and I decided that the experimental nature of my image-hunting quest could be a theme in itself rather than anything more specific, dubbing the collection ‘Life Through a Fisheye Lens’. 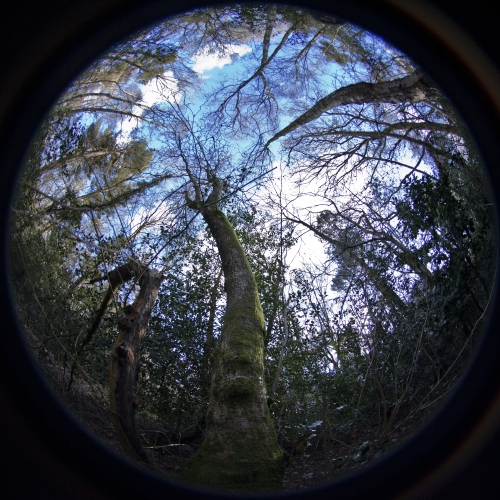 I still needed a few images once I got back home, so I went on a mad dash around Coventry city centre days before the event, snapping some of the more aesthetically interesting buildings in the area, mainly the cathedral and the transport museum.

On the evening itself, thanks to a couple of relaxing pints with one of the other participants beforehand and several practice runs (pro tip: never attempt a Pecha Kucha without first making notes on what you plan to say, and timing yourself saying it) my presentation seemed to go well and I managed to (more or less) keep up with the image changes – I was really pleased with how my photographs looked on the dome and would definitely be interested in taking part again.

As some have asked me if the presentations were recorded/available to view online, I will look into it – they weren’t when I last checked, but at some point I’ll probably upload the rest of my content and the descriptions of the images so watch this space…

I am a freelance artist mainly working with digital video, regularly managing video productions for both organisations and individuals and specialising in the documentation of arts events, exhibitions and performances and interviews, as well as creating my own films. In my own work, I like to examine the poetry in the commonplace, the beauty that goes unnoticed, and the ‘what if?’ I work with a variety of technologies ranging from high definition broadcast suites to low-cost mobile devices. Clients and employers have included British Library Labs, PQA, NCS The Challenge, Kings College London, Thinktank Science Museum and AL Control Laboratories. I am an independent Arts Award Advisor (trained to Gold level) and have worked with numerous community arts organisations in the UK, sharing my skills with young people interested in media production and the creative industries. I have produced and delivered hundreds of video projects, technology-based workshops and public art events. I also offer services such as media conversion, image editing and occasionally design/illustration work. I have my own equipment and car, and can multi-task like a fiend. Contact: mail (at) emmapuente (dot) com Vimeo Facebook LinkedIn
View all posts by Emma Puente →
This entry was posted in Photography and tagged Dome Club, Pecha Kucha, Thinktank. Bookmark the permalink.
%d bloggers like this: